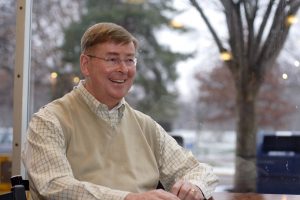 Frans Jager is a first generation immigrant to the USA and a permanent resident. He lives with his wife Christie in North Ridgeville, OH. He has a Law degree from Erasmus University in Rotterdam, the Netherlands and has served in the Royal Dutch Airforce as a Lieutenant. He is Principal of Castnet Corp. providing Management Support and Executive Coaching services to small privately held companies. His earlier professional career has been in general management and supply chain management in several businesses in Europe and in the United States. Ever since arriving on America’s shore he has had a keen interest in America’s history, present and future. He has spent his life putting thoughts and observations on paper for newsletters, magazines, blogs and personal correspondence and maintains a blog named CASTNET COMMENTARY. NEITHER HERE NOR THERE is his first book.

Buy it now on Amazon!

From the Editors:
The scope of this work is ambitious. The author has stepped up to a platform from which to view the current status of the United States through the eyes of a mature, self-aware, first generation Dutch immigrant who is still looking for America to fulfill the vision of promise he and his family came here to discover.

“The first thing that strikes me about “Neither Here nor There” is that the author has succeeded in enunciating the fundamental problems this country is choosing not to address. On reading the introductory chapter, where the author said he intended to address issues in equality, education, technology, immigration, entitlement programs (or social safety nets, if you prefer), and the current ineffectiveness of our two party system, and that he would actually provide his ideas on what needed to be done in each area, I thought, “Yeah, OK.” It seemed such a major undertaking that I had little expectation the author could make meaningful contributions. I was wrong.”

“A book with such simple, straightforward descriptions of America’s top problems—and what to do about them—expressed in common sense wording, is like a breath of clear, fresh air.

Buy this book; skim the first 100 pages and devour the next 100…then share it with your Congressional Representatives (or get them their own copies). Those are the people who need to read these 100 pages and then work together (regardless of party affiliation) to begin the necessary changes, one by one.”